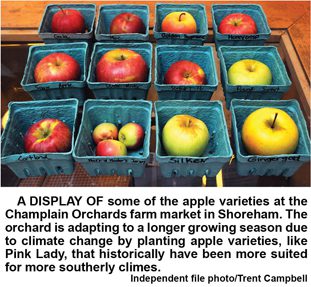 SHOREHAM — Farmers always have to deal with unpredictable weather, but growers of perennial plants like apple trees face additional difficulties with a changing climate. Vermont orchardists have been dealing with the reality of global warming — successfully for the most part — for years, according to Champlain Orchards co-owner and head orchardist Bill Suhr.
Suhr, speaking in early September after the hottest July in the world’s recorded weather history and the hottest August ever in eight Northeastern states, said he and other Addison County orchardists have been adapting to global warming for years.
“We are definitely experiencing drier summers,” Suhr said, “but also more significant rain periods that are unlike what our ancestors experienced in this area.”
A longer growing season means apple growers are experimenting with apple varieties that historically have been more suited for more southerly climates. Five years ago, for example, Suhr started planting Pink Lady trees that are just now starting to bear fruit for his Shoreham business.
“Pink Lady is not normally an apple that would be able to ripen in our climate,” he said, adding that he has also introduced Granny Smith apples, another varietal not previously planted in Vermont.
A traditional Vermont varietal, Northern Spy, and another recent frost-resistant apple Suhr has added, Keepsake, have also extended Champlain Orchards’ season.
“We’re picking well into November now. There are some cold nights in October, and you think the harvest is all done, and the next thing you know the next week has 70-degree temperatures and sun,” he said.
Every year, Suhr said, he replants about 6 percent of his roughly 200 acres of trees, and climate is a factor in his varietal choices.
“I guess you could call it adapting. There’s only so much Champlain Orchards is going to be able to do to curb global warming,” Suhr said. “In an effort to adapt to some changes we’re seeing, we are planting some strains that might not have been able to ripen in time in the past.”
But while the longer, balmier fall is all well and good, warmer springs can be disastrous for growers. A hot spell too early can induce apple trees to blossom, posing a risk of a frost that can destroy the blooms that eventually become fruit.
“If we get going too early and then normal temperatures return and there is a frost, we can lose our whole crop, no fruit growing, and that’s the scariest thing that can happen. With global warming, it’s fun to walk around in flip-flops in March, but the apple grower is scared beyond you-know-what,” Suhr said.
The hot, dry summers also create water problems. Suhr said modern orchardists already typically irrigate because they plant trees much closer together than in the past, a practice that limits the area that needs to be sprayed for pests and fungus, and also makes it more efficient for picking apples.
With fewer rainstorms and those that do occur often heavier, leading to more runoff and less soaking, orchardists must both irrigate more and seek to capture that runoff, he said.
“We wake up thinking water all the time now. We do need to develop water resources here well beyond what we currently have,” Suhr said.
Champlain Orchards already captures rainwater from roofs and parking areas, and Suhr said his business and others are looking into catch basins and satellite ponds and related drainage systems to corral winter and heavy storm runoff as well.
“We really need to emphasize now in Addison County the development of water storage facilities so we can have reserves through these drought periods,” he said.
The changing climate has allowed Champlain Orchard to experiment with other fruit, with admittedly mixed results. Suhr said his 6 acres of peaches and nectarines was lost this year, probably due to a combination of a February cold snap and a spring frost that attacked buds.
But he won’t give up on the project.
“It’s quite special when you grow a Vermont peach, and it is a cost the company is putting on its shoulders through thick and thin,” he said. “We won’t give up, because the nectarine is too heavenly.”
In the long run, Suhr said he is concerned about the state’s signature apple — and the fate of another signature product, maple syrup, which Champlain Orchards combines into a McIntosh & Maple hard cider. (Champlain donates a portion of the sales of this product to the climate change fighting organization 350.org.)
“McIntosh apples won’t be able to be grown in Vermont if climate change continues unabated,” he said. “If all of a sudden we become the Mid-Atlantic climate, McIntosh apples don’t color. They don’t develop the red and they don’t develop the flavor. The same for the maple syrup … The maple production will move further and further north.”
In the meantime, Suhr said the news is not all bad.
“This year some of our fruit size is suffering because on our non-irrigated land we have not received adequate rain,” he said. “The good side of that is the sugar content is sky-high because of the sun concentrating the sugars. Very flavorful apples this year.”
Suhr invited residents and visitors to taste for themselves.
“Folks can be assured the flavor is wonderful,” he said. “Visit their local orchards.”
Read about this fall’s apple harvest by clicking here.