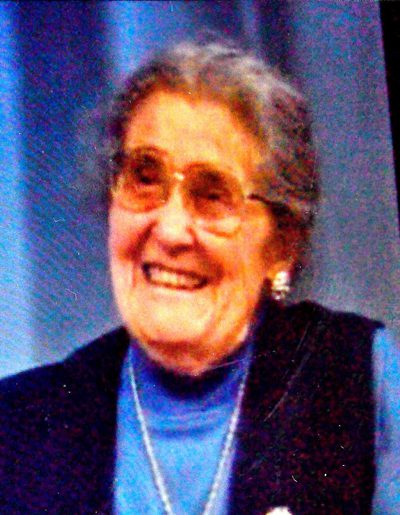 LEICESTER — Virginia Estelle Burgoyne Wolf, a direct descendant of English General John Burgoyne, age 100, passed away Monday, March 15, 2021, at Porter Hospital in Middlebury.
Mrs. Wolf was born in Jersey City, N.J., on October 9, 1920. She was the daughter of James L. and Helen (Quinn) Burgoyne. She grew up in Jersey City, where she received her education. She served during World War II, at Fort Des Moines, Iowa, and Camp Crowder, Missouri.
She was predeceased by her husband, Henry E. Wolf, in 1969. She then moved to Leicester to make her home, moving from Red Bank, N.J.
Virginia was very active in her town, serving as a lister, was appointed to the zoning board and served on the board for Otter Valley Union High School. She had served on the board and as president of Project Independence. She was involved with Elderly Services, R.S.V.P., and the Lake Dunmore-Fern Lake Association. She had also served on the boards of Shard Villa, Horizon Club Advisory and the National Bank of Middlebury. She had been a communicant at St. Mary’s Catholic Church in Brandon.
She is survived by one son, J. Lee Baker of Goshen; a granddaughter, Stephani Pizzi-Miller of Camas, Wash.; a nephew, Lawrence B. Green and his wife Loretta of Weybridge; and her daughter-in-law, Patricia Baker of San Diageo, Calif. Three great-grandchildren; two great-great-grandchildren and several grand-nieces also survive her.
In addition to her husband she was also predeceased by her siblings, J. Lawrence Burgoyne Jr. and Helen M. Green.
A Mass of Christian Burial will be celebrated on Thursday, March 18, at 11 a.m., at St. Mary’s Catholic Church in Brandon. The Rev. Maurice Moreau, pastor will be the celebrant.
A private graveside committal service and burial will take place at a later date in George Washington Memorial Park Cemetery in Paramus, N.J.
Arrangements are under the direction of the Miller & Ketcham Funeral Home in Brandon. ◊