Letter to the editor: VTANG flyover was appreciated 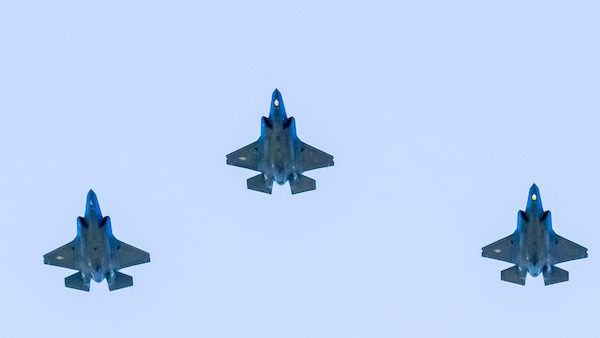 Letter to the editor: VTANG flyover was appreciated

Photographer Max Kraus captured this image of the Air National Guard jets flying over Addison County on May 22.
By David Pistilli

I was disheartened to read and hear several people disparaging Friday’s VTANG flyover in honor of our frontline medics. To those who felt aggrieved, I sincerely offer a different perspective.
To pilot an aircraft off the ground and land it safely again requires skill and practice. To do so in a high performance aircraft requires yet more. To navigate from point to point over the earth, to do that in close formation, and to do it at low level are just a few of the many tens of similar skills a pilot must practice. It takes hundreds of repetitions for the skills to become so natural that they can be relied upon under duress of combat, which very few of us have experienced but for which all of these pilots must prepare.
What we observed Friday was a training evolution that was one of those repetitions, neither a parade nor a publicity stunt. Yes, training costs money but it was not diverted from equipment or supplies for our medics, and every minute was valuable to the aviators and each technician involved in generating those aircraft. That we were afforded this briefest glimpse into that training, and that they honored our hospital as one of their waypoints, filled me with pride and, yes, a little thrill. I am not embarrassed. And my ears are not split.
We have the finest Air Force in the world, and our Green Mountain Boys are a part of it. I utterly respect those who would not have us be part of it, or would not have an Air Force at all. My sense, though, could we poll the hundreds or thousands of medics who were intended to be honored Friday, is that the majority would be proud of both, and humbled to be recognized. The most meaningful sentiment to me on Memorial Day, as we remember all those who sacrificed so we can enjoy this day, would be gratitude that we have Vermonters who can render this honor to other Vermonters while preparing to potentially make that same sacrifice.
David Pistilli
Middlebury