VERGENNES — Visiting Middlebury Union High School boys’ basketball took control early at Vergennes on Friday with strong man-to-man defense and rebounding — and the inside presence of senior center Penn Riney — on the way to a 57-37 victory at a packed Commodore gymnasium. 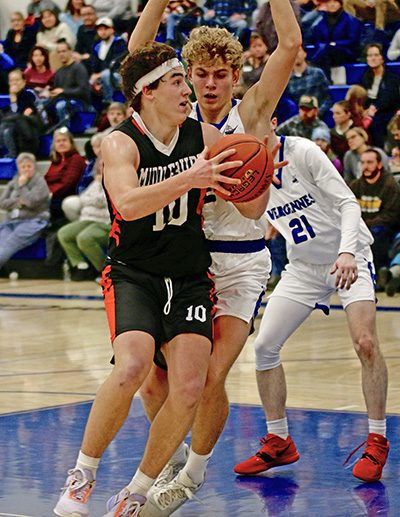 Riney scored nine of his game-high 22 points, and teammate Graham Mattrick added five of his 11 as they combined for all 14 of the Tigers’ first-quarter points as their team took a 14-3 lead after one period. Only a three-point play by Wyatt Rochon answered for the host Commodores.

Play evened out for the next two periods, and the Commodores sliced a 15-point Tiger lead to 10 in the fourth quarter, but MUHS had responded by feeding Riney inside while Willem Berry heated up from behind the arc as they pulled away.

Coach Chris Altemose’s MUHS team improved to 4-4, respectable considering they have played only one home game due to a pair of early weather postponements and then water damage to Tigers’ gym floor over the holiday break. That problem took their home court offline for all of January.

On Friday, Altemose was most pleased with the Tigers’ 45-28 edge on the boards and game-long commitment to defense.

“We know they have some shooters, so we were trying to keep them in front of us, but challenge the shots, and I thought this was probably our best defensive effort yet for a whole game,” he said. “That’s been the theme for us this week, consistency. We’ve put quarters together, but we haven’t put 32 minutes together yet, and I thought we did that tonight.”

Altemose was also happy that the Tigers were smart enough to make sure Riney got the ball when it was clear he could have a good night.

“Offensively, we were finally playing to our strengths a little bit more. Penn had a great game, and unselfishly our team kept finding him,” he said.

VUHS Coach Josh Carter saw his team’s four-game winning streak come to an end, but at 7-4 the Commodores remain in the running for a top-four seed in Division III. He saw Friday’s game in much the same way Altemose did.

“They were really physical tonight, and they really outworked us in the block area and got some easy looks,” Carter said. “And we had a bunch of shots that didn’t fall that would have given us a little more momentum. But you’ve got to give credit to them. Their defense was really sound. We didn’t get a lot of good looks. And the looks we did get we didn’t convert enough of.” 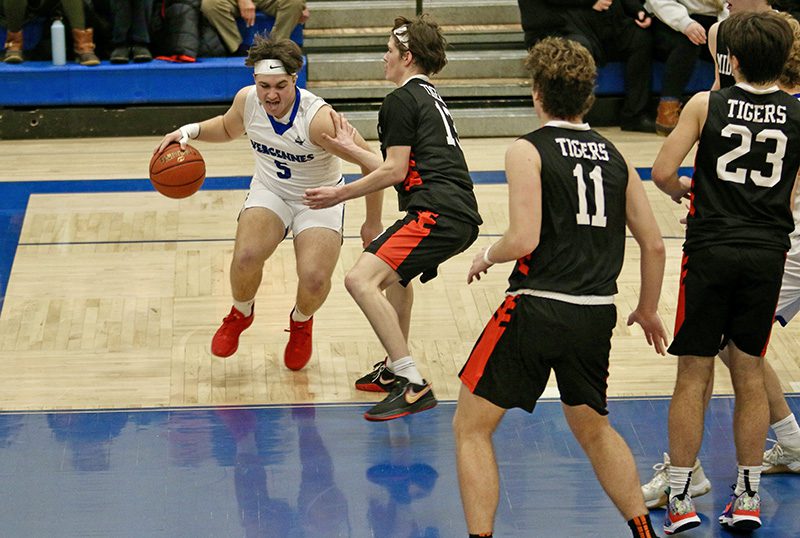 COMMODORE GUARD XAVIER DeBlois drives into the lane on Friday at VUHS against the defense of Tiger forward Noah Doherty-Konczal.
Independent photo/Steve James

“Riney was a monster. He did a really good job getting position down low and attacking,” he said. “Credit to Middlebury for getting him the ball on the block.”

The game did even out for much of the way after the lopsided first quarter. The Tigers outscored the Commodores in the second period, but only by 13-12. VUHS center Oakley Francis scored six points in the period, while Graham Mattrick scored five for the Tigers as MUHS led 27-15 at the break.

The Commodores’ man defense slowed the Tigers in the third period, and VUHS guard Elijah Duprey’s three points helped cut the lead to 33-22 with less than three minutes to go in the 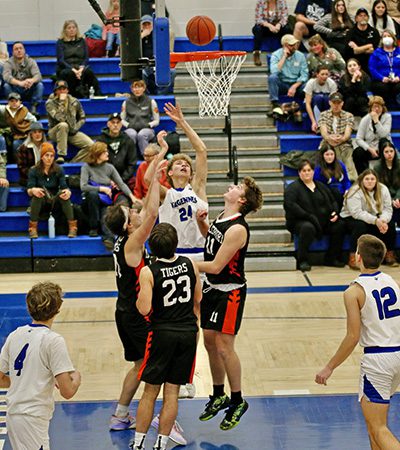 VUHS CENTER OAKLEY Francis puts up this shot on his home court on Friday in a crowd of Tigers, including, from left, Penn Riney, Graham Mattrick and Willem Berry.
Independent photo/Steve James

quarter. But VUHS still struggled to gain offensive consistency, and the Tigers added to their lead entering the fourth, 37-23, as Jack Trudeau and Berry each scored four points in the quarter.

When the Tigers opened the fourth with Riney scoring in the post and Trudeau sinking a jumper, it was an 18-point game at 41-23.

But steals by Duprey, Oakley Francis and Devin Brisson and seven quick points at the other end helped cut the lead to 43-30 at 5:45, and a comeback was possible. In that stretch Abram Francis assisted buckets by Oakley Francis and Duprey on inbounds plays, with Duprey adding a free throw on his layup and then a jumper on the next possession. Only a Riney post conversion answered for the Tigers in that stretch.

But the Tigers responded with a 10-0 runover the next two minutes. Mattrick went coast-to-coast for a layup, Berry nailed two threes, and Riney powered in his own miss in that stretch. The game was effectively over.

“We played really hard. We just didn’t make enough plays,” Carter said. “I was really proud of our run in the fourth quarter. But it just wasn’t enough, and it was a little too late.”

Carter said the Commodores have been doing a lot of things well, while tough competition like Friday’s should help prepare them for the D-III tournament.

“We have been sharing the ball well. We have been working really hard on the defensive end and creating a little bit of chaos. The team spirit and energy has been good,” he said. “But I think this is a bit of a gut check for us, a good wake-up call for what we want to be. That was a game that I would think would be as physical as Barre would be, and Middlebury was ready for the challenge, and we weren’t. But I think hopefully we will be.” 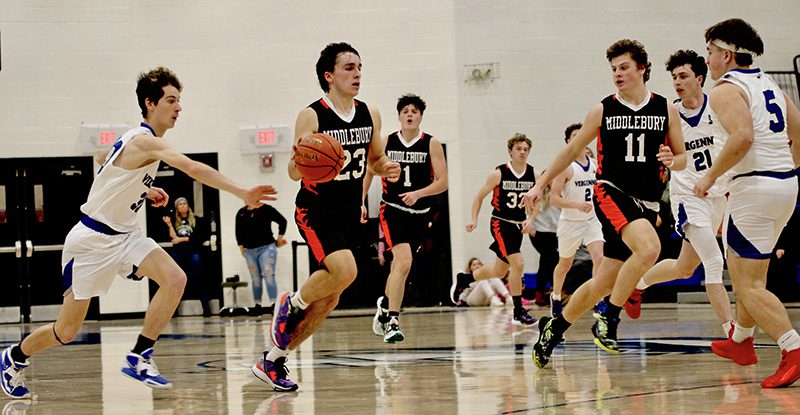 The Tigers are in the running for a D-II home playoff game, and Altemose said he has seen steady improvement, with the exception of a 13-point loss at 9-2 North Country three days earlier.

“Overall, I think every day, every game, we’ve been taking steps forward until Tuesday night up in North Country,” he said. “It was nice to see us bounce back tonight and see us move back in the right direction.”

Like other coaches, Altemose praised the atmosphere in the VUHS gym.

“This is a tough place to win, but we love coming here because it’s the best gym in the state. It’s always on a Friday night, and you get a good crowd. County rival. And it’s so fun,” he said. “I was talking to the guys, (saying) take a minute and enjoy this, especially the seniors. This is your last time coming here. Enjoy this, and when the ball goes up let’s play basketball. But take a moment just to enjoy the experience.” 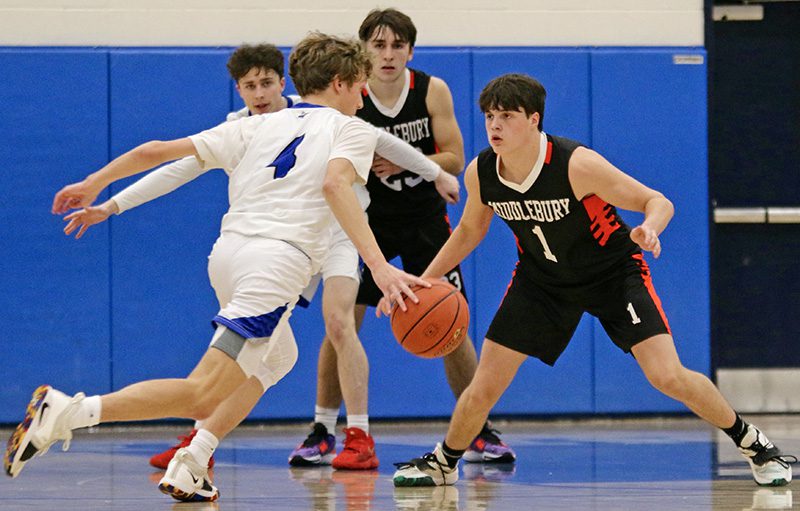