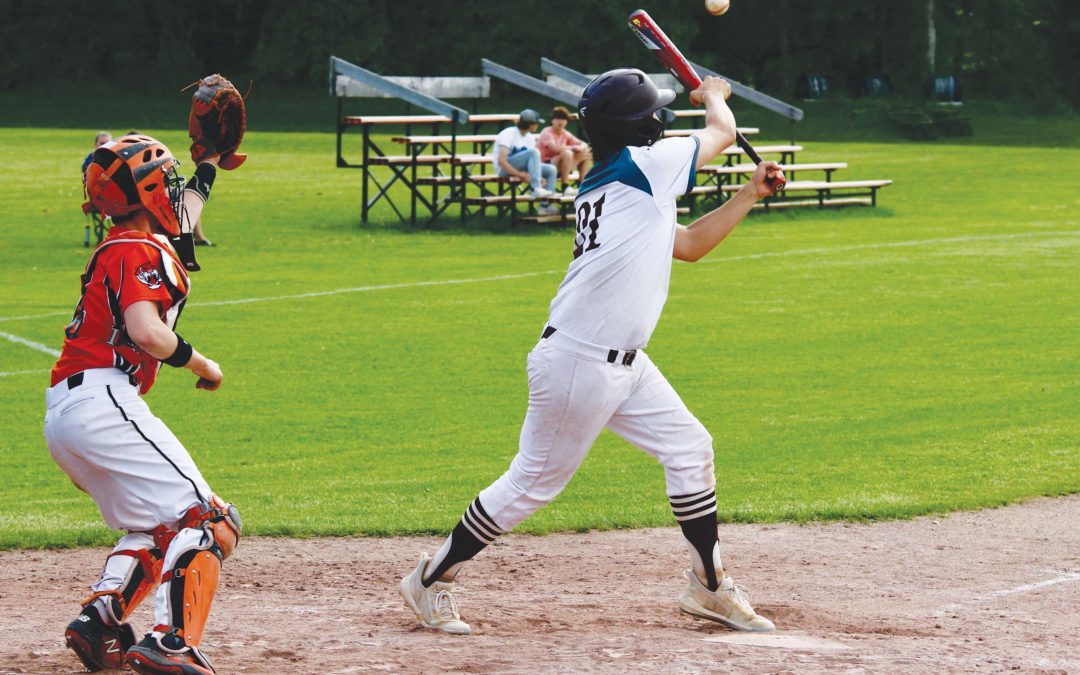 EAGLE SENIOR CARTER Monks somehow managed to get down a game-winning squeeze bunt at MUHS. The pitch came in a foot over and behind his head, and Monks pretzeled his torso to get his bat on the ball and softly drop it in no man’s land between home plate and the mound. I’ve seen a lot of baseball, but never a bunt like that. Independent photo/Steve James Independent
By Andy Kirkaldy

ADDISON COUNTY — The Mount Abraham baseball team defeated both of its county rivals in action between May 18 and 24, one of them in extra innings, and also earned two other victories to stretch its winning streak to nine.

Teams will play their final regular-season games this weekend and open the playoffs next week.

On Tuesday, the Eagles, who improved to 11-4, and the 1-11 Tigers faced off in arguably the best game of the spring. The Eagles broke through with four runs in the eighth to earn a 5-1 win.

The rally was keyed by an almost miraculous suicide squeeze bunt scoring Tanner Harris with the winning run. Eagle first baseman Carter Monks managed to put the bunt in play on a pitch thrown over and behind his head.

Monks explained the play afterward, first just saying he “knew I had to get it down,” and talking about his confidence and his coaches’ faith in him, and the fact the Eagles work on their bunting. Then he talked about the at-bat itself.

“We practice that, with these pitches that are away and all over the place, how to get it down,” Monks said. “And a lot of it’s in the moment, you know? You don’t think about it. I just stuck the bat out.”

The big inning ended a pitching duel between Tiger freshman Tucker Morter and Eagle senior Neil Guy, both of whom went the distance and kept their opponents off balance by spotting fastballs in the strike zone and mixing in curves.

Morter allowed more hits, a dozen, but three of the hits came in the eighth, and he induced many popups and lazy fly balls while striking out five.

“He had his curveball going real good tonight,” MUHS Coach Tim Paquette said. “He kept us in the game for a long time.”

Guy allowed just four hits, three to Cole Warren, while walking one and striking out seven. 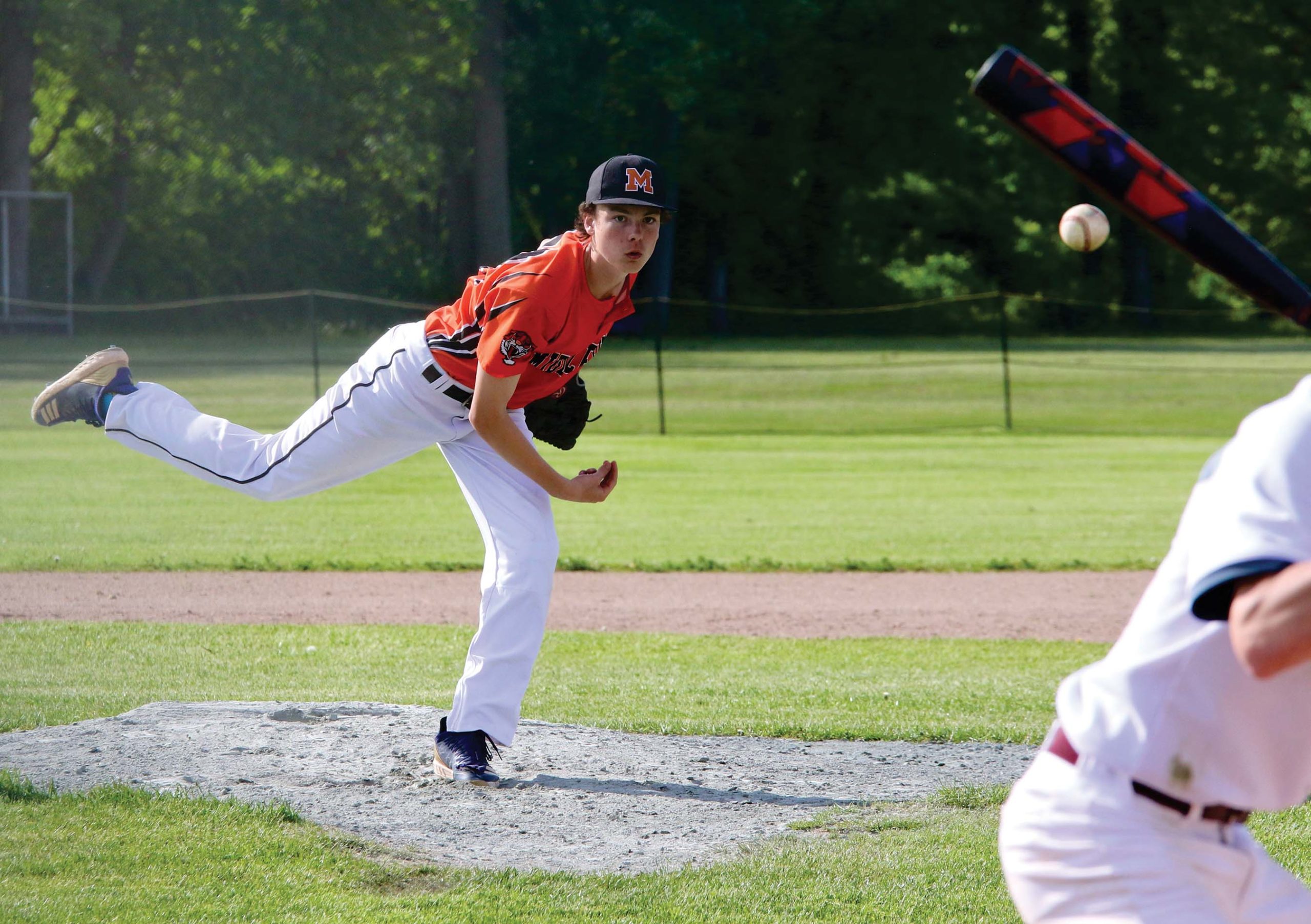 One of Warren’s hits came in the first inning and produced the Tiger run. It followed a single by Alex Sperry and Guy’s errant pickoff throw that moved Sperry into scoring position.

But the only other inning with more than one Tiger baserunner was the sixth, when Guy hit Warren with a pitch, and catcher Tim Whitney reached on an error to put two on with none out.

But Guy retired the next three hitters in order to end the threat.

The Eagles also turned a nifty double play in the fourth. Milo Gordon reached on a miscue, but with one out Jacob Kemp grounded sharply to Monks at first, who tagged the bag and then threw out Gordon at second to end the inning. Left fielder Sperry’s running catch of a foul ball was a Tiger defensive highlight.

Morter worked out of a jam in the second, when Tanner Castillo and Monks singled with one out, but could not get out of trouble in the sixth. Adam Mansfield and Harris singled to lead off. Morter struck out the next two batters, but Norm Benoit pulled a two-out single to right to score Mansfield and tie the game.

In the eighth the Tigers misplayed Harris’s liner to the outfield, and he raced around to third base. Monks fouled off his first squeeze attempt and then reached up and behind his head to drop a bunt between home and the mound, scoring Harris to make it 2-1.

Monks reached when no one covered first and moved to second on a ground out. With two outs Bradley Wells walked, and a Chance Denecker triple scored both runners. Gus Hill singled Denecker home to create the final score.

“It was just one bad inning,” said Coach Paquette, adding, “The boys played their heart out.”

Monks addressed the Eagles’ nine straight wins. He said the Eagles had “the feeling all along” they would bounce back from a 2-4 start, and once they rallied to win one key game after the early losses their confidence just grew.

“We’re locked in. We all buy into it. We get loud. We all cheer each other on,” Monks said. “We’re a real supportive group.”

“Our pitchers have been throwing strikes and giving us a chance to compete, and we’ve been getting a lot of timely hitting,” Stetson said. “And they’ve gelled as a group.”

Back on May 18, the Eagles edged visiting VUHS, 6-4, in a game suspended from the day before. On May 17 the game started with on-and-off showers that eventually became steadier, and the umpires called it with the Eagles up, 5-4, in the middle of the fourth.

The Commodores struck first with a pair of runs off Eagle starter Hill, who allowed four runs, two earned, on two hits and one walk and struck out six in the first four innings to earn the win.

Mount Abe rallied to score five straight off Tyler Kimball, who allowed the five runs, none earned, on two hits and four walks while whiffing three over the first three innings. In the difficult conditions on May 17 the teams combined for seven errors, five by the Eagles. 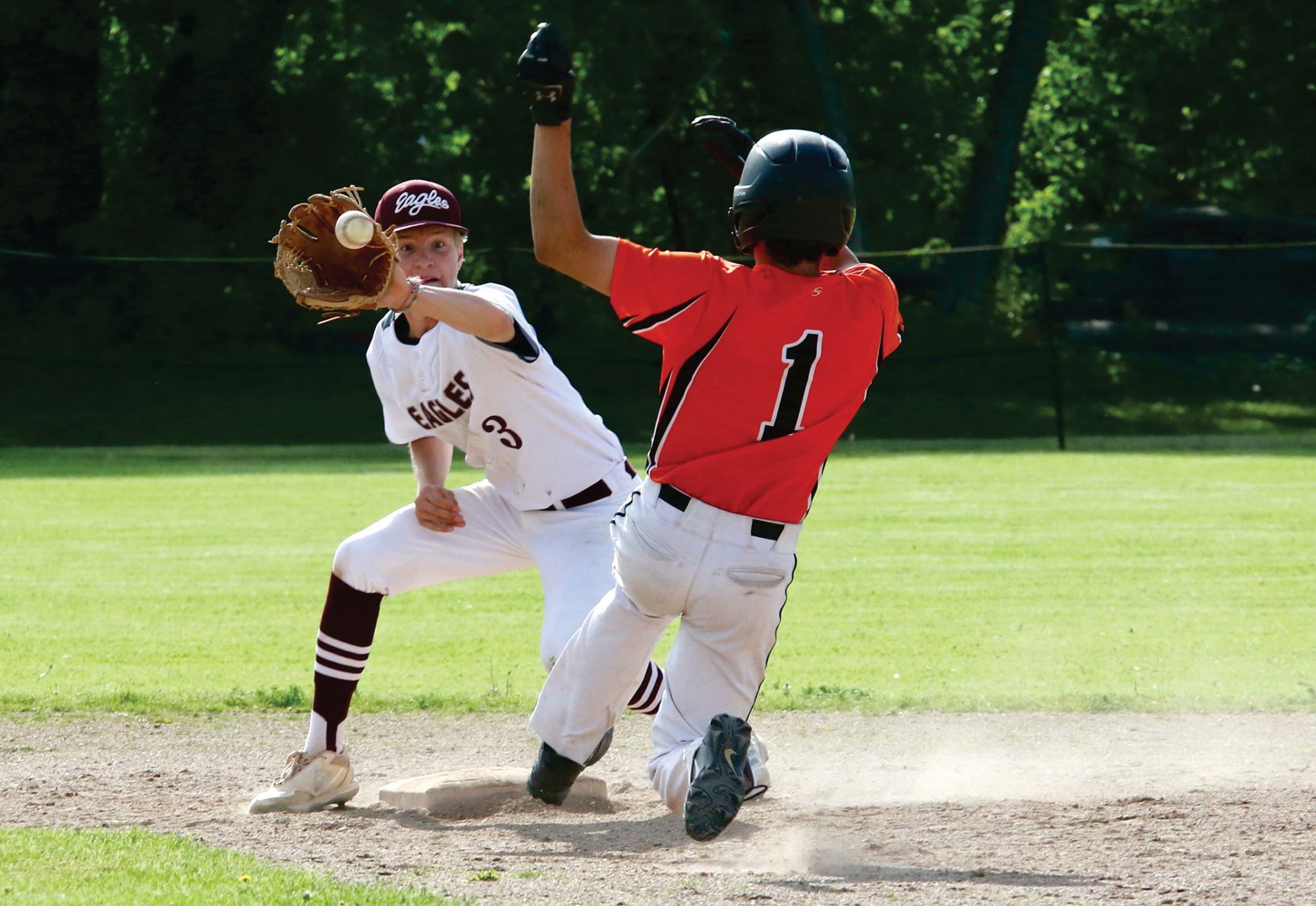 For VUHS Kimball had a hit and an RBI, and Parker Kayhart had two hits, walked and scored a run. Zeke Dubois, Gabe Scribner and Peyton Paquette scored the other VUHS runs.

On Saturday, host VUHS avenged an earlier loss at MUHS with an 11-2 victory. Kimball tossed a complete-game five hitter, striking out five. Offensively, Elijah Duprey tripled and singled, Nate Muzzy drove in four runs with a pair of hits, and Kayhart singled in two runs to lead the Commodore attack.

On May 18, host Missisquoi shut down the Tigers, 10-0 in six innings. Two MVU pitchers held the Tigers to six hits; Whitney took the pitching loss.

The Tigers’ May 19 game at Enosburg was postponed and eventually canceled.

On Tuesday, visiting Enosburg bested the Commodores, 6-2. Muzzy took the loss, allowing just three hits and striking out eight over six innings. Duprey, Peyton Paquette and Reese Paquette all doubled for VUHS, which dropped to 3-10.

On Saturday, the Eagles coasted at Milton, 14-4, as Mansfield tossed a complete-game win, allowing three earned runs on seven hits while striking out five. Hill had a pair of hits and scored twice, Grover drove in two runs and scored twice, and Benoit, Guy and Monks each had a hit and two RBIs for the Eagles.

OV fell to 5-9 with a home game this Wednesday vs. Hartford and a game at Fair Haven on Saturday morning remaining.