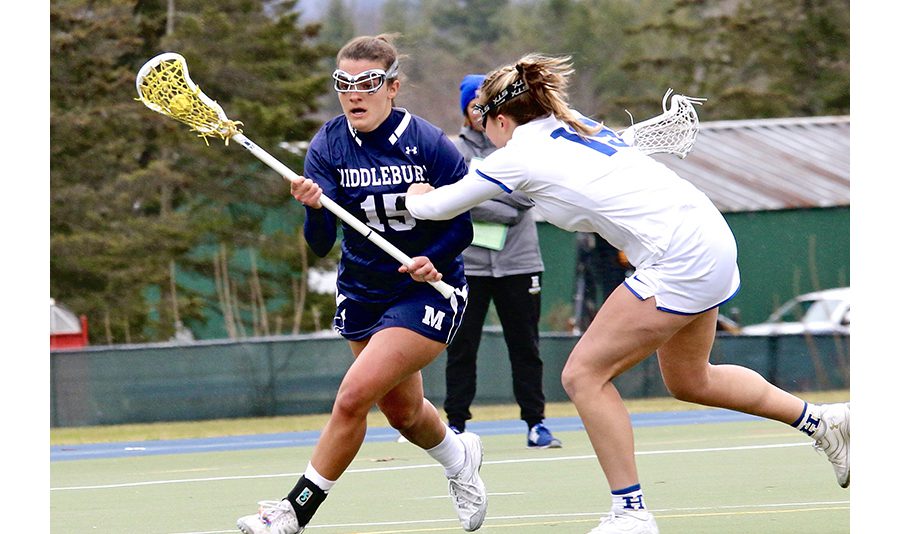 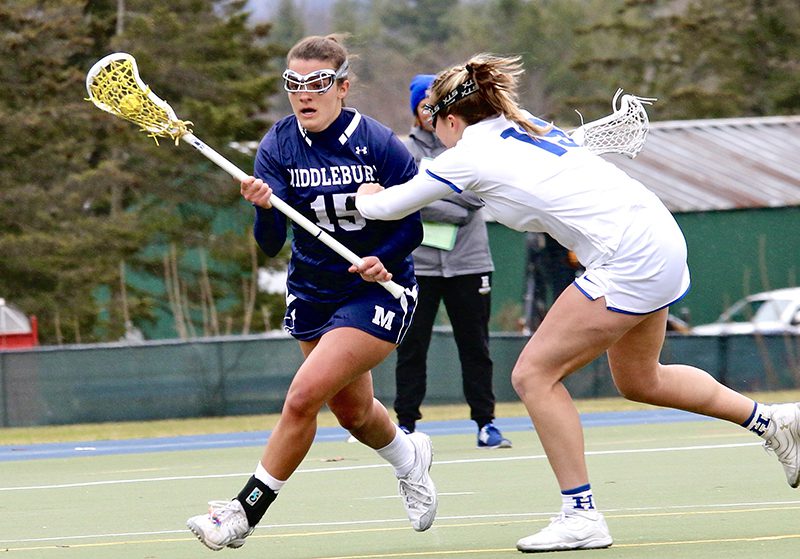 MIDDLEBURY — The Middlebury College women’s lacrosse team was almost derailed on Saturday, but ultimately the Panther express picked up two more wins this past weekend — both at home, over ranked opponents.

Middlebury improved its record to 12-0.

In that cold and rainy Saturday game, No. 11 Wesleyan led by three goals midway through the third period before the Panthers rallied for a 12-11 win, their first victory by fewer than four goals this season. On Sunday they pulled away in the second period on the way to a 16-7 victory over No. 12 Hamilton.

Middlebury remained atop the NCAA Division III coaches poll heading into what could be the Panthers’ toughest remaining regular-season matchup on Saturday: No. 5 Colby will visit at noon. The Mules are 10-1 and have defeated No. 4 Salisbury on the road.

The biggest news this past weekend was how tough Saturday’s game was for the Panthers. Coach Kate Livesay credited Wesleyan for their strong performance, and her team own for responding to its biggest challenge thus far. Two goals from freshman Hope Shue tied the game at 11-11 before sophomore Nike Mormile netted the game-winner on a feed from senior Lily Riseberg.

“Wesleyan is a very good team. They have some very good players who had very good games,” Livesay said. “I think they were really ready to play us, and it was good to be pushed … It’s good to refocus to have a game like that where you have to come from behind. It’s a good confidence booster.”

On Sunday, the Panthers won behind a strong performance from the defensive corps of senior Emma White, sophomore Chloe Newman and freshman Maddie Paylor, and Shue’s move from middie to attack, which paid off with seven goals on seven shots. 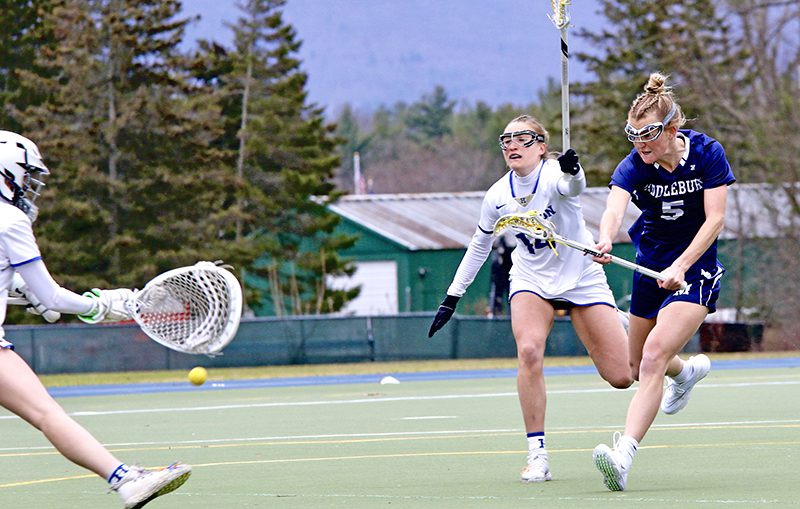 Livesay first talked about defense. She adapts her game plan for the opponent, and her back line executed an aggressive approach that shut down Hamilton’s settled attack — most of their offense came in transition.

“Today we felt like we could really get out and pester a bit and force some sloppiness,” Livesay said.

“Hope is giving us a big spark offensively,” Livesay said. “Her speed and ability to get past defenders is really exciting.”

The attack offers a lot more than Shue. Junior Jane Earley scored twice in each game and remains the team’s leading scorer with 39 goals. On Saturday, eight Panthers scored, and on Sunday seven found the net. For example Livesay noted Mormile, Saturday’s hero, is well down the team scoring list (eighth with 12 goals), but came through.

“The balanced scoring is so nice,” Livesay said. “To have the confidence in so many players to take those shots in important moments is great.”

On Saturday, the Panthers overcame a 10-7 deficit midway through the third period to edge Wesleyan. Mormile netted the game-winner with two minutes to go, and Panther goalie Annie Enrietto denied Cardinal Kate Balicki with 13 seconds left to preserve the victory. 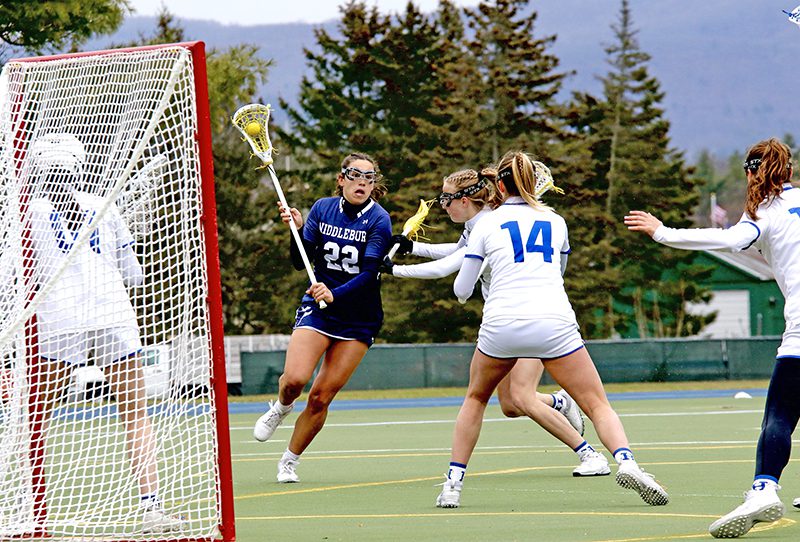 SENIOR MIDDIE GRACE Getman moves into the fan and weighs her options during the Panther women’s lacrosse victory over visiting Hamilton on Sunday. Middlebury improved to 12-0.
Independent photo/Steve James

The Cardinals took a 3-0 lead on goals by Olivia Lai, Laura Blaine and Balicki in the rain and cold. The Panthers made it 3-2 on goals by Maggie Coughlin and Kelcey Dion before Lai scored again.

Then Middlebury appeared to take charge with four straight goals to take a 6-4 lead. The scores came from Susan Rowley, assisted by Erin Nicholas; Dion with a reverse-stick move; Anna Spehr on a free position with seconds left in the quarter; and Grace Getman early in the second period.

Wesleyan responded by outscoring the Panthers by 6-1 over 20 minutes spanning halftime, to lead, 10-7, at 7:10 of the third period.

The Panthers began their comeback with goals from Earley and Rowley to make it 10-9, and Enrietto kept it a one-goal game after three periods with a point-blank stop on Abby Logan.

At 8:44 of the fourth Cardinal Kendall Mittleman made it 11-9, but Shue converted two free positions to make it 11-11 at 6:27. Mormile’s game-winner came when Riseberg fed her in the middle of the fan, and Mormile whipped the ball home over goalie Corin Grady’s shoulder. Enrietto sealed the win with a stop at 0:13.

Enrietto totaled nine saves. For Wesleyan, Abby Wolk made two stops in the first 18:06, and Grady made seven.

On Sunday the Panthers faced Hamilton, which fell to 5-3 after being upset on Saturday by Bates. In Middlebury, Hamilton took the lead 12 seconds in, when Eva Abel tossed in the first of her five goals. 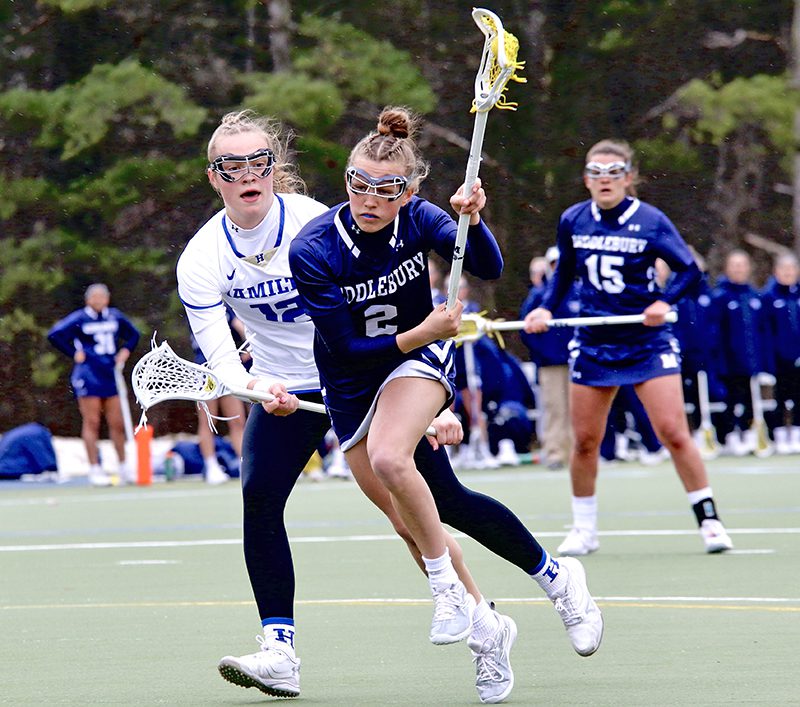 FRESHMAN HOPE SHUE goes on the attack for the Panther women’s lax team during Sunday’s 16-7 victory over visiting Hamilton. Moving from midfield to the front line for the first time, Shue responded with a game-high seven goals.
Independent photo/Steve James

Nicholas equalized two minutes later with a lucky bounce off a mishandled pass under pressure, and Shue twice swept in from the left side to make it 3-1. Abel went coast-to-coast after picking up a Panther turnover to make it 3-2 after one quarter.

Middlebury took charge in the second period on goals by Dion, swooping in from the right side, Rowley and Shue free positions, and Getman scoring with an assist from Earley.

Earley’s 100th career goal, with just under four minutes remaining in the half, made it 8-2. Abel scored a rare settled-offense goal for Hamilton before the half.

The Panthers then put the game out of reach with the first five goals of the second half, three by Shue, and one each from Earley and Dion. Abel beat the clock to make it 13-4 after three, and the teams traded goals in the fourth: Shue, Earley and Riseberg scored for the Panthers.

She would like to see more passing on offense rather than seeing the attackers simply rely on speed and athleticism.

“We sometimes get tunnel vision and just try to dodge in from the top. We need to create a little more balance, a little more threat from behind the cage, and a little more tempo from ball movement,” Livesay said.

At the same time she is confident her team can iron out a few wrinkles.

“We have really great team chemistry. It’s a fun group,” Livesay said. “And they all work really hard.” 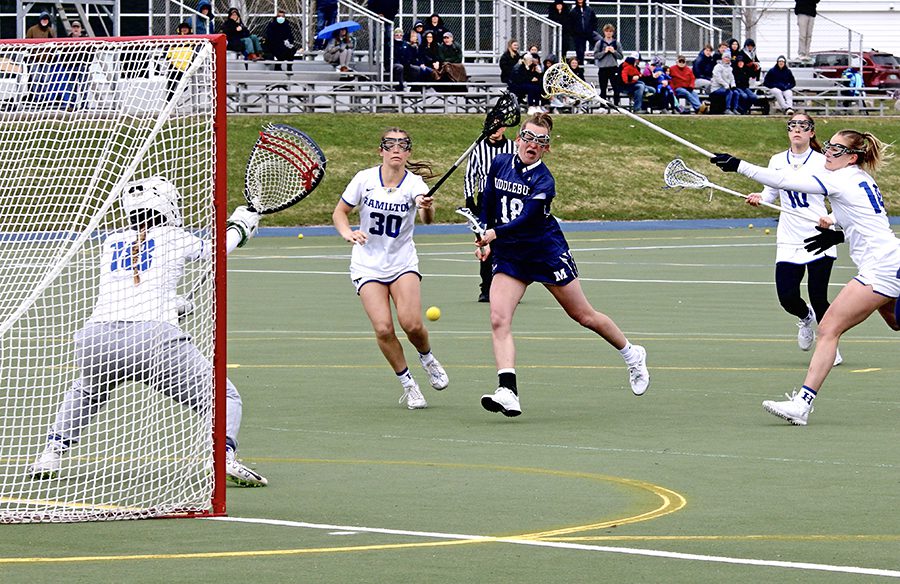