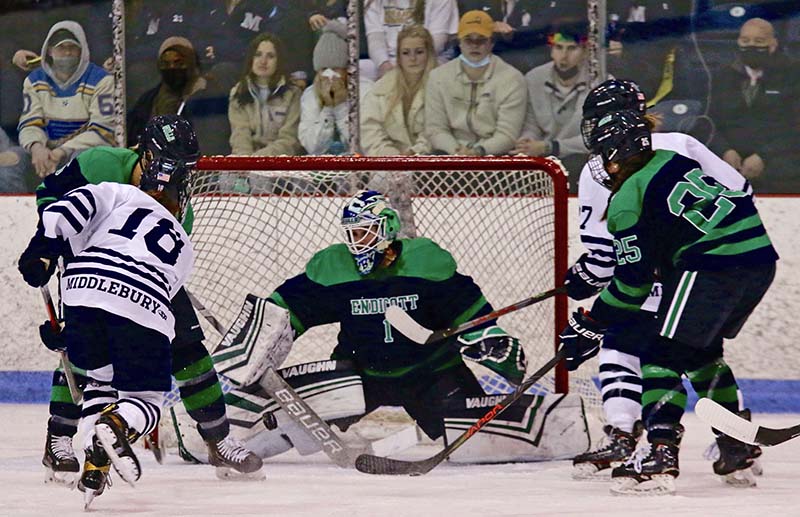 ENDICOTT GOALIE MICAELA O’Brien stopped this bid by Panther Jenna Letterie, but Middlebury women’s hockey put four pucks past O’Brien in an NCAA quarterfinal on Saturday to advance to the tournament’s Final Four, which the Panthers will host on Friday and Saturday. Independent photo/Steve James
By Andy Kirkaldy

MIDDLEBURY — The first two times the Middlebury College women’s hockey team met Endicott this season the Panthers had to rally to pull out 2-1 wins. 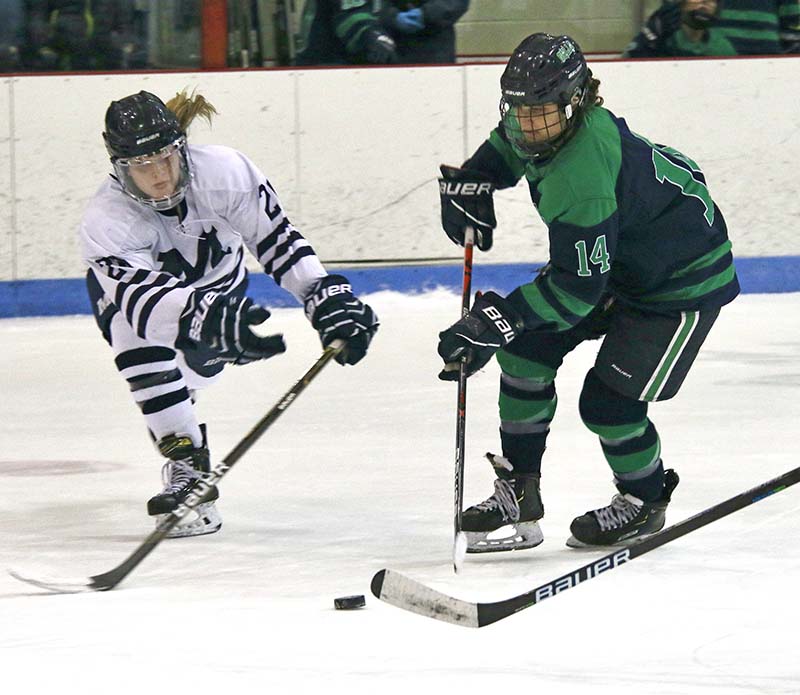 The story they penned lacked the drama of the first two games, and Endicott (19-5-1) launched about as many shots on Merageas, 20, as the Gulls had in those two earlier meetings combined (21).

But after a bit of a slow start in which Merageas made two key saves, the 25-0 Panthers scored as many goals combined as they had in the first two games and cruised to a 4-0 victory.

Quinlan scored three of those goals, all on rebounds, by following a game plan that Coach Bill Mandigo outlined and the Panthers worked on before Saturday’s game. Mandigo wanted more traffic in front of Gull goalie Micaela O’Brien, who excelled when the teams met previously.

“We changed the way we played against them. We had played them twice this year, and really two tight games, and we focused all week on people getting to the net,” Mandigo said in the post-game press conference. “Thank goodness Kylie was at practice all week, because she got to the front of the net.”

Quinlan, whose three goals brought her total to eight, confirmed the game plan.

“It all starts on preparation throughout the week. We were really focusing on getting to the net,” Quinlan said. “But a lot of it is also a testament to my teammates, forechecking super hard … and also our defensemen getting it past the first person and getting it to the net. Whenever that happens you always have a chance.”

The Panther goalie made some key saves.

With the game scoreless in the eighth minute Merageas used her glove to deflect a Samantha Fantasia shot from the left circle wide right. Then, with about 4:20 left in the period and Middlebury nursing a 1-0 lead after Quinlan’s first goal, Merageas using her blocker to stone a Kat Keith breakaway, a play that seemed to give the Panthers more life.

“We work on those in practice every day, focusing on the breakaway drills,” Merageas said. “I think ultimately it gave our team a little kind of boost that we needed in the first period, so I was definitely excited to have that happen.” 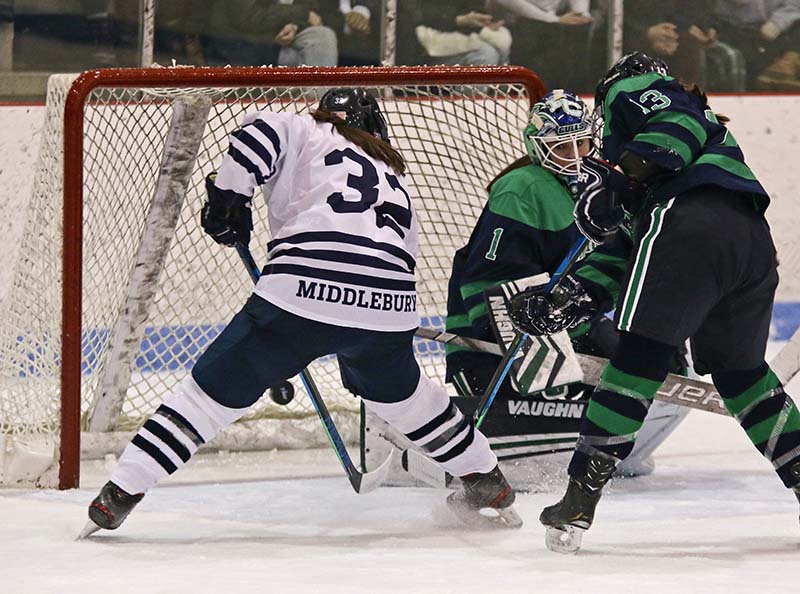 The Panthers were also thrilled to learn right after the quarterfinal they will host the NCAA’s Final Four. At 3 p.m. on this coming Friday No. 2 Plattsburgh (25-2) will meet No. 5 Gustavus Adolphus (24-3), and at 7 p.m. on Friday the Panthers will face No. 3 Elmira (25-2). Middlebury defeated Elmira, 2-1, in November. The final is set for 7 p.m. on Saturday, following a 3 p.m. consolation.

The Panthers were not at their sharpest early on, as their passes were not always tape to tape. Still, Raia Schluter challenged O’Brien on a two-on-one five minutes in, and Madi Leidt and Jenna Letterie threatened 12 minutes in.

With 6:05 remaining in the period the Panthers broke through. Kim slid the puck from left to right on the blue line to Vira. Vira slapped a shot through traffic on goal, the rebound popped to Quinlan at the left post, and she rapped it home.

The Panthers ramped up the pressure in the second, and O’Brien denied Ellie Barney at the left post about two-and-half minutes in. Soon afterward the Panthers worked the puck to Hendrikson, who slapped a shot home from the right circle through a crowd of players. Barney and defender Cece Ziegler picked up assists.

The Panthers controlled play and outshot the Gulls by 11-5 in the period, with bids from Schluter and Letterie before Quinlan struck again with 3:41 on the clock on a power play.

This rebound came at the right post on a Kim shot from the center of the blue line, with Vira picking up the second assist.

The Gulls had a chance to get back in the game with a power play 14 seconds into the third period, but the Panthers held them without a shot. They allowed only four in the period as Merageas finished with 20 saves, to 25 for O’Brien for the Gulls.

With 7:02 remaining Quinlan became the 13th player in NCAA D-III tournament history to net a hat trick with another power-play goal. Stationed at the left post, she backhanded home a Vira rebound, with Kim getting the second assist as the Panthers and most of the crowd of more than 1,000 celebrated.

The Panthers said they have appreciated the big crowds at their NESCAC tournament and NCAA games. Merageas said most of them have never skated before so many fans.

They would love to see more of the same this weekend. 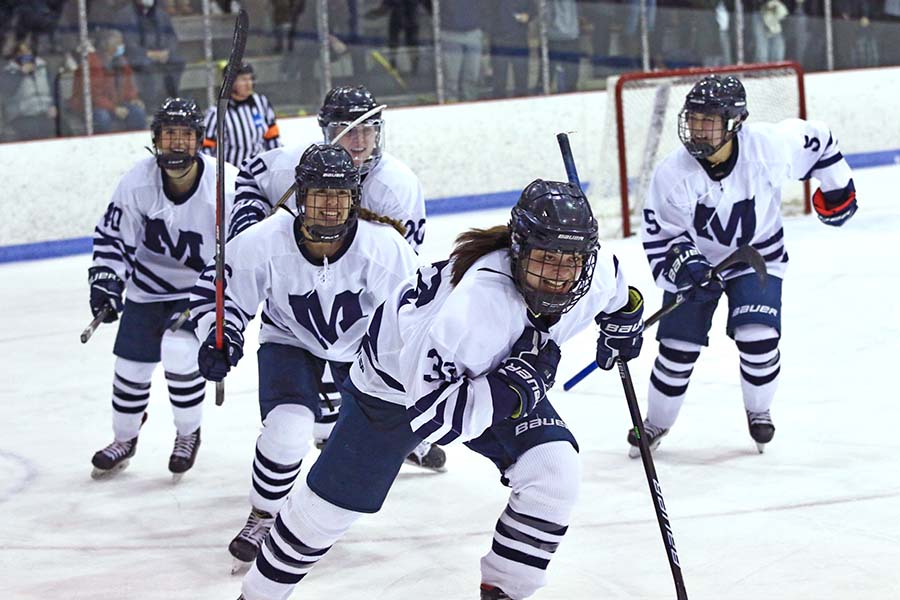 PANTHER FRESHMAN KYLIE Quinlan and her teammates are all smiles as they skate back to their bench after Quinlan’s third goal on Saturday gave Middlebury a 4-0 lead over visiting Endicott in an NCAA quarterfinal.
Independent photo/Steve James

“It’s amazing. It’s a total game-changer,” Merageas said. “I can speak for a lot of my teammates. I haven’t played in front of this many people ever, and the fact that they bring unparalleled energy every time I think really pushes our team.”

“We’re really excited to play in front of our fans and our community,” she said.

“We’re playing to have another week together,” Quinlan said. “With this group the love we have for each other really pulls us forward.”

Mandigo is pleased to keep working with them.

And even with 14 players having two years or fewer of experience, including 10 skating for Middlebury for the first time, Mandigo said he is confident in the Panthers heading into the Final Four.

“I like their chances,” he said. “They play hard. They work hard. They’re fast. They’re relentless to the puck.” 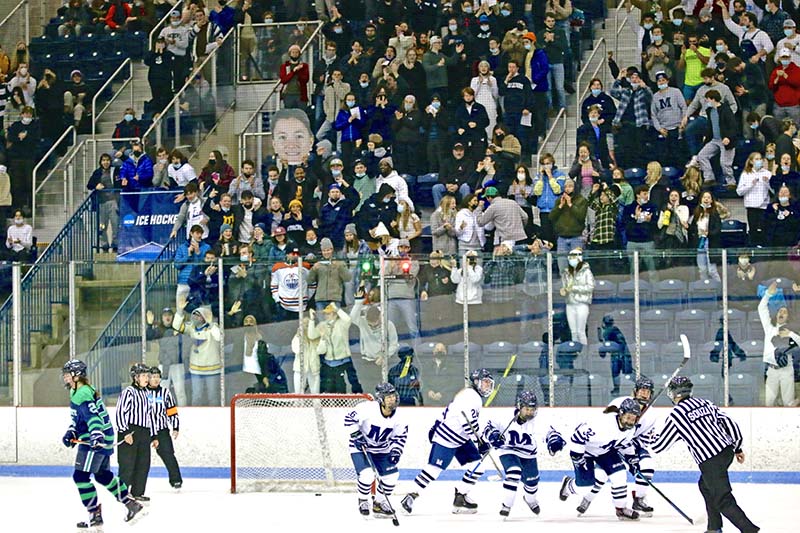 THE MIDDLEBURY WOMEN’S hockey team drew a big and happy crowd to its NCAA quarterfinal on Saturday, here celebrating a goal in the Panthers’ 4-0 win. Another good turnout is expected this weekend at Kenyon Arena for the tournament’s Final Four.
Independent photo/Steve James