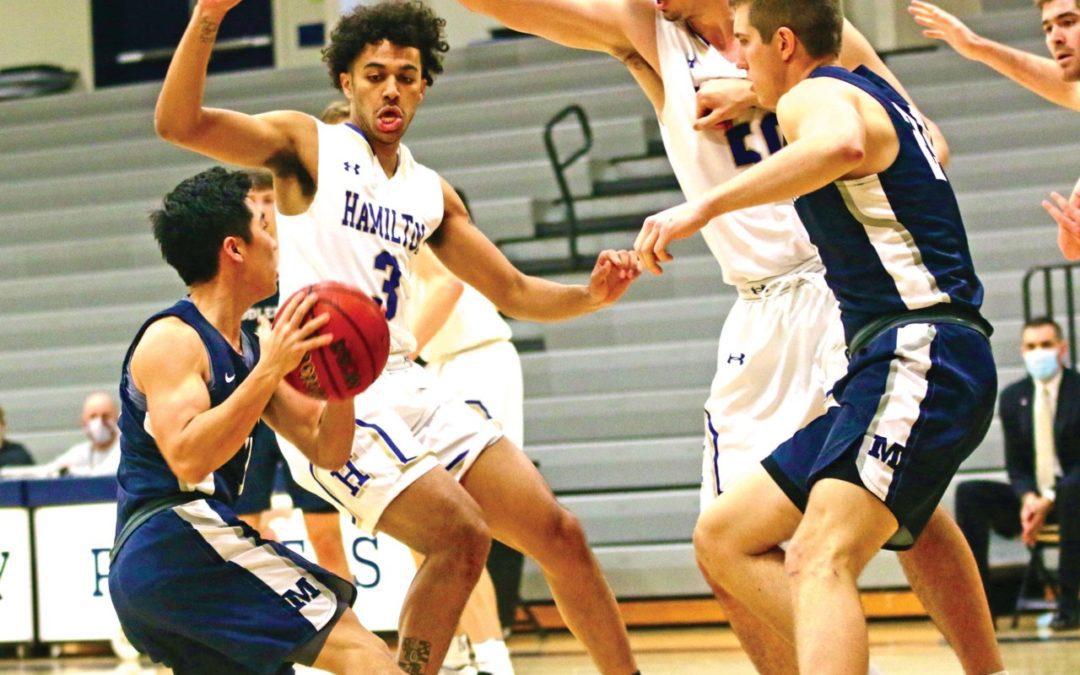 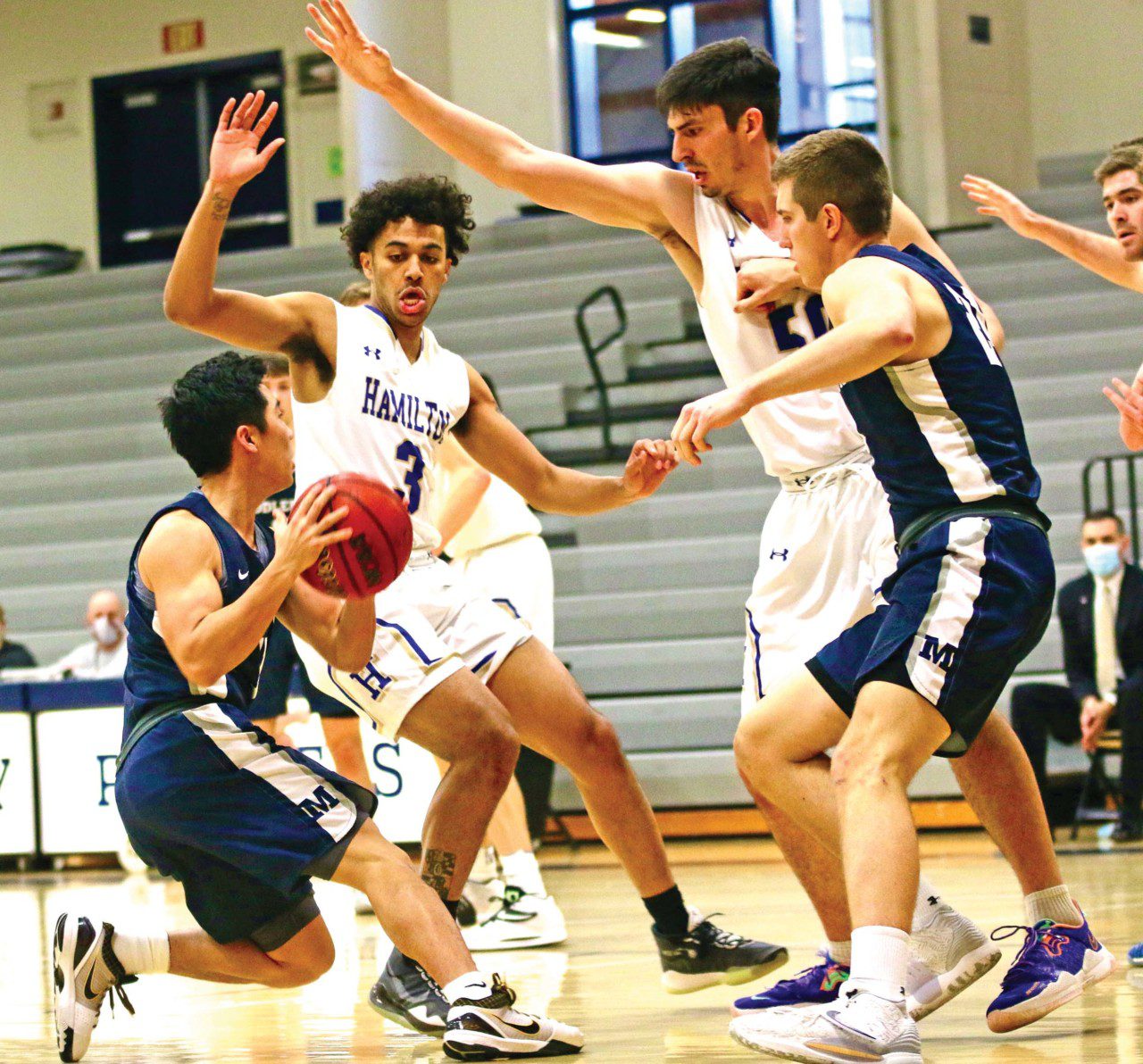 PANTHER GUARD LUCAS Shin finds the lane to the basket crowded on this play during the Middlebury men’s basketball team’s win over visiting Hamilton on Saturday. The Panthers improved to 11-2, 2-0 in NESCAC play after also beating Amherst on Friday. Independent photo/Steve James 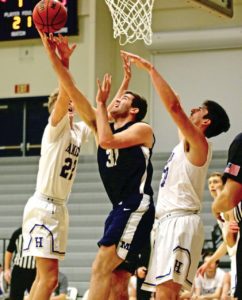 PANTHER FORWARD ALEX Sobel draws a foul early in the Middlebury men’s basketball team’s win over Hamilton on Saturday, which improved the Panthers to 11-2, 2-0 in NESCAC play. Sobel scored 28 points and grabbed a career-high 21 rebounds in the game.
Independent photo/Steve James

On Friday night the Panther men’s basketball team (11-2, 2-0 NESCAC) pulled away from visiting Amherst in the late going to prevail, 78-64, in the NESCAC opener for both teams.

A back-and-forth first half ended in a 31-31 tie. The Mammoths earned a 48-44 lead midway through the second half, but the Panthers went on top for good with 11 unanswered points, a run capped by a three from Sam Stevens, to make it 55-48 with 8:16 remaining.

Amherst chipped away at the deficit and cut the lead to 58-55, but the Panthers took charge with a 7-0 run. Middlebury went 13 for 13 at the free-throw line in the final few minutes to nail down the win.

Stevens led all players with a career-high 28 points, including five three-pointers in nine attempts. Alex Sobel recorded his eighth double-double of the season with 24 points and a game-high 15 boards, while blocking three shots. Noah Osher chipped in with nine points and three steals for the Panthers.

Canin Reynolds paced the Mammoths by hitting five treys for 15 points, while Will Scherer had 12 points and pulled down nine boards.

On Saturday the Panthers completed their weekend NESCAC sweep and earned their ninth straight victory by defeating visiting Hamilton, 67-59. The Continentals dropped to 6-6, 0-2 in the league. Sobel sparked the Panthers with 28 points and a career-high 21 rebounds. 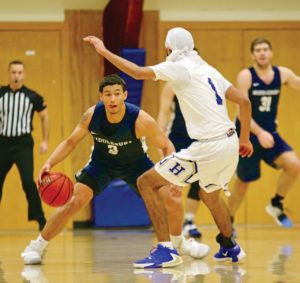 The Panthers trailed early, but took the lead for good at 16-15 of the first half, and soon stretched it out to 28-20. Hamilton’s Liam Regan sank a three to cut the lead to five with just over three minutes left before the break, but the Panthers closed the half on a 5-0 run in which Sobel scored twice inside and hit a free throw.

The closest Hamilton came in the second half was 44-38 at 9:20. The Panthers led by as many as 11 in the final minute, when they hit six of eight free throws to hold off the Continentals.

Sobel’s 21 rebounds tie him with Dylan Sinnickson for the fourth-best single-game total in program history, and his work helped the Panthers outrebound Hamilton, 46-32. It was also his ninth double-double in 13 games. Stevens added 17 points, including four three-pointers, and Osher chipped in with 11 points and five boards.

The women’s basketball team saw weekend games at Amherst and Hamilton postponed. The 6-5 Panthers are scheduled to host two NESCAC games this weekend, starting with Colby at 7 p.m. on Friday.

On Tuesday non-league foe Worcester Polytechnic Institute improved to 11-1 by edging the Panthers, 53-49.

The teams traded runs in a first half that ended with the visiting Engineers up by 28-26.

WPI never trailed in the second half, but couldn’t put away the Panthers. The Engineers took an eight-point lead in the third, but two Reagan McDonald three-pointers helped erase almost all of it.

Eventually, the Panthers tied the score at 47-47 with 6:51 remaining, but saw their offense stall as WPI scored the game’s only four points over the next five minutes to make it 51-47 with just under two minutes to go.

Two free throws from Alexa Mustafaj brought the Panthers within 51-49 a minute to go, but the Engineers hit two free throws in the final seconds to nail down the win.

Mustafaj led all players with 19 points, while Gianna Palli pulled down a game-high 13 boards and chipped in eight points, and Claire Miller added 10 points.

Alex Scariati paced WPI with 15 points and 10 rebounds, and Adriana Niles and Emily Raynowska each scored 10.

After three league losses the Panther men’s hockey team stands at 1-7, 0-6 in NESCAC play, with a Friday game at Plattsburgh up next. 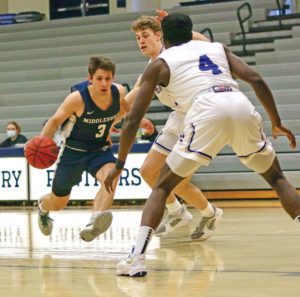 On this past Friday the Panthers dropped a 5-0 NESCAC decision at Trinity. The Bantams, who improved to 5-4, 3-2 NESCAC, took a 2-0 lead in the first period on two goals by Gerrard Maretta, the second one coming on a late power play.

Chris Garbe had two good chances on a Panther power play, but was denied by Trinity goalie Patrick Pugliese. Pugliese also made a good stop on Cole Joslin in the second period.

Trinity put the game away with a three-goal third period, with Paul Selleck, Devin Tongue and Nicholas Siffring doing the damage.

Pugliese worked a 29-save shutout for Trinity, while Panther goalie Adam Wisco finished with 38 saves.

On Saturday host Wesleyan hung on for a 3-1 victory over the Panthers. The Cardinals scored 2:21 into the game on a D.J. Dixon breakaway, and then 3:33 into the second period, when Stevie O’Connor converted a behind-the-net pass.

The Panthers made it 2-1 at 15:40 of the period when Jake Oblak netted a rebound from the doorstep after back-to-back stops by Cardinal goalie Erik Voloshin.

The Panthers pressed during a third-period power play, but could not break through, and the Cardinals added an empty-netter. Voloshin finished with 25 saves, while Jake Horoho made 29 saves for the Panthers.

In a Tuesday game postponed from earlier in the season, visiting Amherst (3-6-1, 2-4-1) netted five goals in the second period on the way to a 6-3 victory over the Panthers.

Middlebury took a 1-0 first-period lead on Sam Amato’s first career goal, but the Mammoths scored five unanswered in the second period, starting with 4:23 gone and making it 5-1 with 1.2 seconds left. 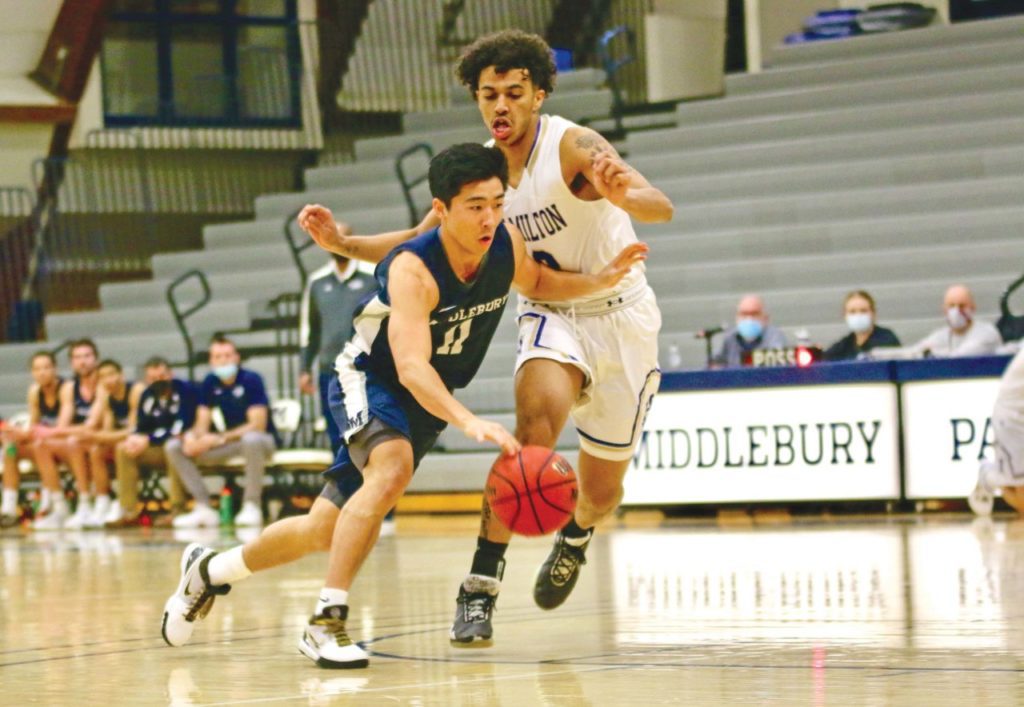 PANTHER LUCAS SHIN moves past a Hamilton defender during Middlebury’s 67-57 victory on Saturday over the Continentals. Panther men’s basketball improved to 2-0 in NESCAC and 11-2 overall with the result.