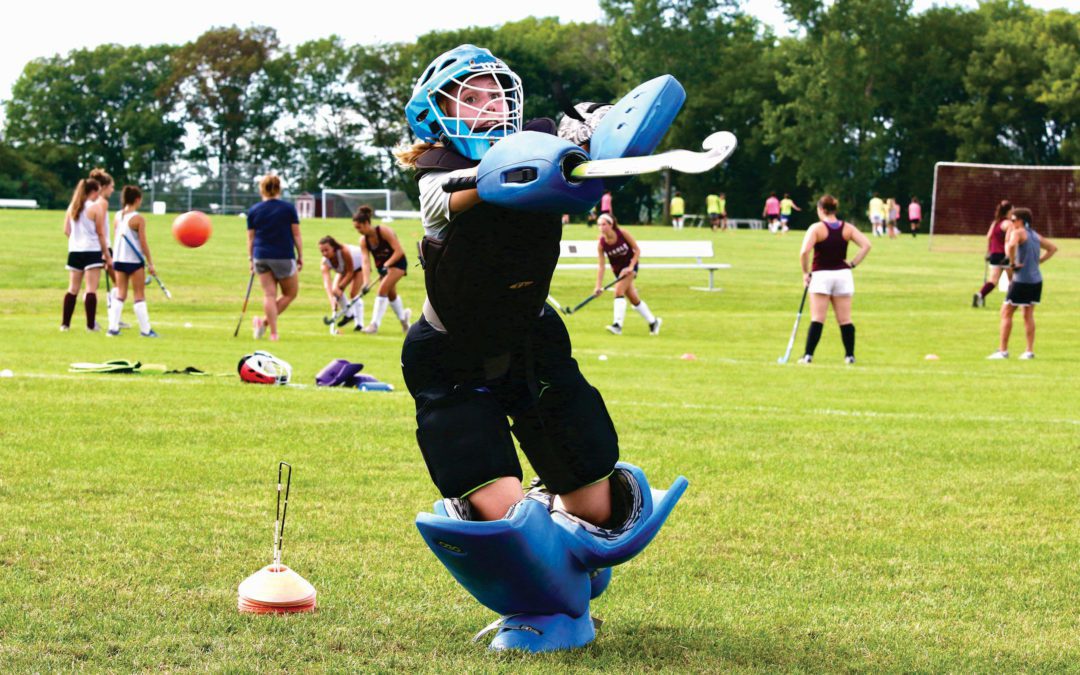 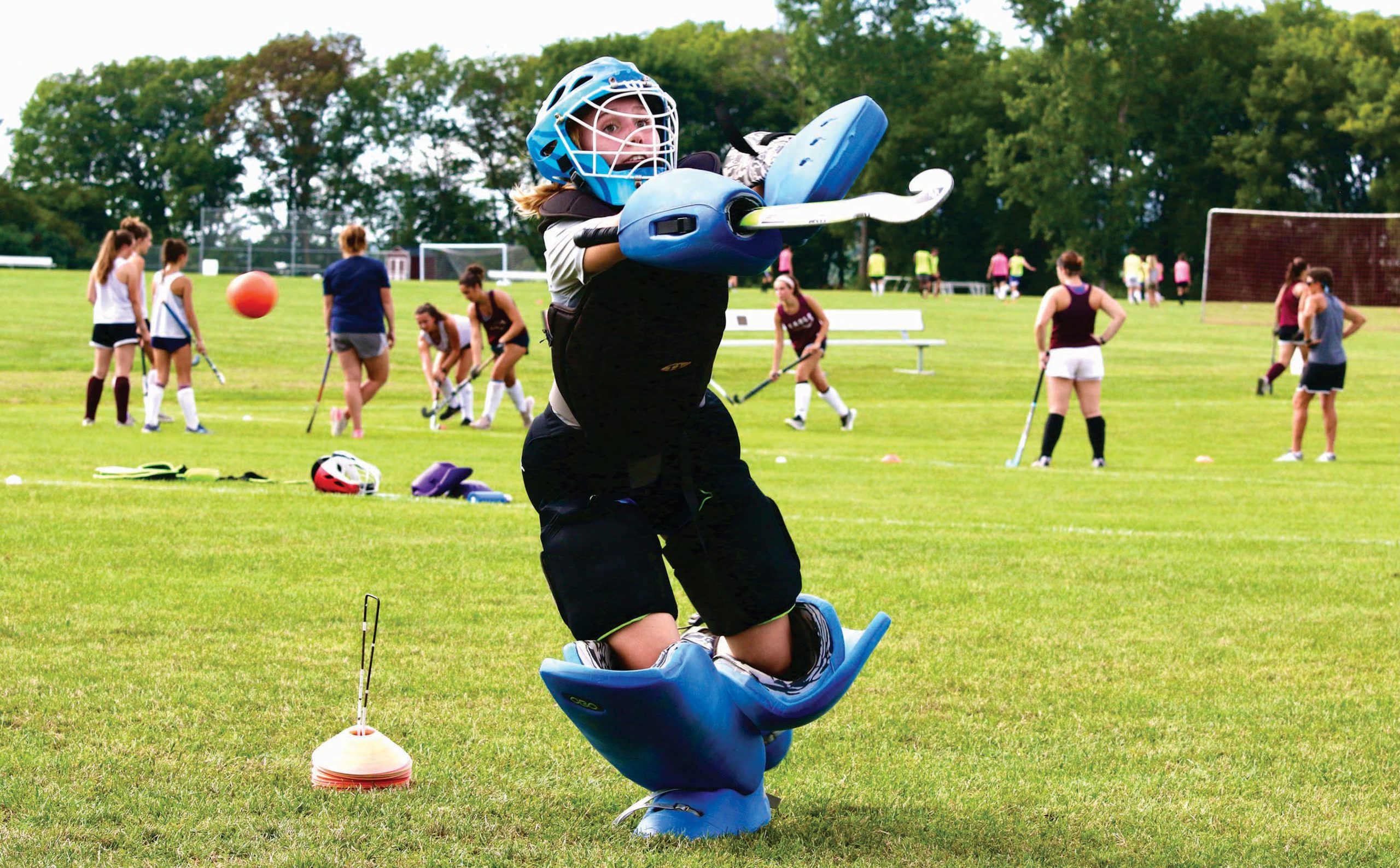 MADDIE DONALDSON MAKES a save during Eagles practice on Monday in Bristol as the Mount Abe field hockey team prepares to defend their Division II state title. Independent photo/Steve James

ADDISON COUNTY — A full schedule of high school sports arrives this Friday, and for the first time since 2019 it will start without COVID-induced delays. If Vermont stays the course vs. the delta variant the regular season will be followed by full playoffs.

This fall also brings the return of golf, at least on a limited basis, to Middlebury and Vergennes union high schools, and the introduction of bass fishing as a sport at VUHS.

Coach Joe Crodelle’s Tiger golf teams are large enough to compete. The boys’ team will host two events at Ralph Myhre Golf Course, the first this coming Wednesday, but the girls do not have any home events.

Former OV boys’ basketball coach Greg Hughes takes over the OV golf program, which has a busy schedule and a decent turnout. The Otters were set to open at Woodstock on Sept. 1 and have tournaments on the docket at Woodstock and Lake Morey next week.

VUHS Coach Alex Socinski has two varsity golfers who will travel to tournaments, but several middle schoolers give hope for sustaining the program in the years to come.

VUHS Bass Fishing Coach Jack McGuire said his Commodores will compete in three tournaments, all in South Hero. The first will be held on Sept. 19.

Meanwhile, other programs are hitting the turf or the trails this weekend, not all at home.

Coach Dennis Smith’s MUHS football team — happy and confident now that it is back to blocking, tackling and running the ball after 7v7, all-passing touch football a year ago — will play at Division II Fair Haven on Friday before its D-I home opener at 7 p.m. a week later vs. the Burlington-South Burlington collective.

Coach Jeff Stein’s Mount Abraham-VUHS collective showed well in 7v7, and there is some talk the Eagles could surprise in D-II. Two tough opening games await, however, at Mount Anthony on this Friday and at Rice on Sept. 11, before the Eagles take on Fair Haven on Sept. 18 in their first home game.

Coach’s Kipp Denis’s Otter Valley squad also played well in 2020. The Otters, with a young but talented quarterback, open at Missisquoi on Saturday before hosting Poultney on Sept. 11 at 1 p.m.

As is often the case, Coach Mary Stetson’s Mount Abe field hockey team has a tough act to follow: The Eagles won their third straight D-II title in 2020, this time rallying before prevailing in a shootout. Almost a dozen veterans return to lead the Eagles onto the field on Friday at 4 p.m. vs. Missisquoi. Next is a date at Rice on Tuesday.

Second-year Coach Jodie Keith led a young Otter team to a .500 record this past fall, and they will look to improve on that mark starting at 11 a.m. on Saturday in a home game vs. Brattleboro. Rival Rutland is next, with a visit to Brandon on Sept. 9 at 4 p.m.

Former MUHS and Castleton University standout Brandi (Whittemore) Correia, already the Tiger girls’ lacrosse coach, added MUHS field hockey coach to her résumé this offseason. Correia will try to move a program forward that has failed to gain traction in the Metro Conference in recent seasons. The Tigers open at Burlington on Sept. 9 before hosting Mt. Mansfield on Sept. 13.

Coach Tammi Blanchard’s Otters are the first girls’ soccer team out of the gate. After finishing just under .500 in 2020, OV opens at Black River’s annual tournament in Ludlow on Friday night vs. Proctor and will play either Green Mt. Union or LeLand & Gray the next day. The Otters’ home opener vs. Woodstock comes on Sept. 8 at 4:30 p.m.

Coach Dustin Corrigan’s Eagle girls are up next, with a Saturday game at Metro foe Burlington. The Eagles, looking to bounce back from an uncharacteristic one-win 2020 season with a strong turnout for the program, are not at home until their fourth game on Sept. 18, when Colchester visits at 10 a.m.

At 11 a.m. this Saturday morning Reeves Livesay makes his Tiger girls’ soccer coaching debut at Montpelier; he made a sideways move from the boys’ program. The Tigers are also hoping to improve on a one-win campaign. Their home debut comes at 4:30 p.m. on Tuesday vs. Enosburg.

At VUHS, the coaching tandem of Dwight Irish and Peter Maneen returns to lead the Commodore girls’ team, which has reached the D-III final three years in a row, only to fall short. Several returning players will look to help reverse that trend, starting with games at Randolph on Saturday and at Fairfax on Tuesday. The Commodores will host Missisquoi on Sept. 10 at 4:30 p.m.

Coach Kevin Hayes’ Commodores lead off the boys’ soccer season by entertaining Northfield-Williamstown this Friday at 4:30 p.m., followed by another home game vs. Winooski on Wednesday. VUHS is coming off an 8-2 season in which the Commodores earned the top seed in D-II, but were upset in the semifinal round by eventual champion Peoples, the No. 4 seed.

Coach Dick Williams’s Otters debut at the same time on Friday with a home game vs. West Rutland. OV next visits Proctor on Wednesday. A still-young team will be eyeing improvement on its three-win 2020 campaign.

Coach Chris George takes over the Tiger boys’ team and is confident in its ability to continue the winning ways it enjoyed under Livesay. The Tigers host Metro opponent Colchester on Wednesday at 4:30 p.m. before heading all the way down Route 7 to meet Mount Anthony next Saturday morning.

Former Mount Abe player Rider MacCrellish, a member of an Eagle boys’ title team, moved up from the Eagle JV job to replace Coach Bob Russell this fall. MacCrellish will debut as the program head when the Eagles host U-32 at 4:30 p.m. on Thursday the 9th, and Colchester will visit on the 14th. Mount Abe won just twice last year, but has young talent.

All three Addison County cross-country teams will open on Saturday at the annual Essex Invitational.

Coach Chris Anderson returns to lead the Tiger program, which is coming off fourth-place finishes for both the girls and boys in D-II a year ago. Runners on both squads have either graduated or transferred, but plenty return and many join the team after strong middle school careers.

Seven 9th-graders signed up to bolster Coach Eva Friend’s Mount Abe running squad, which also sees a few of its top runners return as the Eagles seek to move up in D-II.

Mary Neffinger, who has led the VUHS middle school track team, takes over a rebuilding varsity XC program this fall and will also lead the VUHS track teams. Runners who helped the Commodores boys finish fifth in D-II cross country and then won bushels of D-III track medals graduated, and varsity numbers are thin. But a couple dozen have signed up for the middle school program.

The final new coach of the fall is at OV: Cam Perta takes the reins of the Otter cross-country program that has produced outstanding individual runners, if not championship team results.

OV will visit Rutland this coming Tuesday and then host a Southern Vermont League meet on Sept. 14.