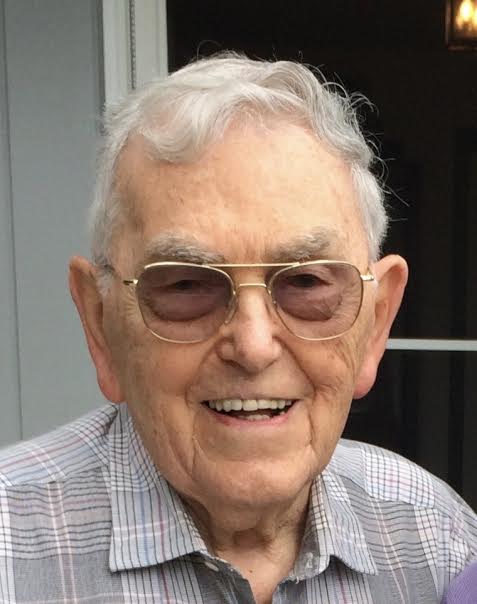 MIDDLEBURY — Ronald Olin Hadley, 98, died Oct. 11, 2019, at EastView Terraces of Middlebury, Vt.
Ron was born on June 28, 1921, in Portland, Ore., the son of Olin C. and Elma (Paulsen) Hadley.
Ron was raised in Gilroy, Calif. He received his Bachelor’s degree in Business Administration from San Jose State University, and his Commission as an Ensign in the United States Navy Reserve from the Midshipmen’s School at Columbia University, New York City, in 1943.
He served in the American, European/African and Pacific/Asian theaters during World War II and after. As wave commander of the AP Thurston 77, he made landings during the invasions on Omaha Beach (D Day/Normandy), Southern France, Iwo Jima and Okinawa. After the Japanese surrender, and the close of WWII, as ship’s navigator, he was part of the “Magic Carpet Operation” returning servicemen from throughout the Pacific, finishing his naval career as a lieutenant.
He was married to Jane Ardell “Dell” Jewett on Nov. 16, 1944, in San Jose, Calif. After his release from the Navy he worked for Pacific Telephone Company in San Francisco, Calif., until he was transferred to AT&T headquarters in New York City, N.Y., where he held various management positions. He and Dell had five daughters and lived in Montclair, N.J. and then Bernardsville, N.J.
When they retired in 1984 they moved to Lincoln, Vt., one of their favorite vacation places, and where Ron was instrumental in the building of the current library. The year 2003 brought about the final move to Middlebury, Vt.
Ron loved to travel and did so extensively around the U.S. and world. He was very active in Rotary over his many years and served as president of the Rotary Clubs of Bernardsville, N.J. and Middlebury, Vt., as well as several District Offices. He was a Paul Harris Fellow of Rotary International and became an Honorary Lifetime Member on Aug. 7, 2019.
Ron was a social man who enjoyed sports (cheering on the Oregon Ducks and the New England Patriots football teams), and talking to, and learning from others. Friends and family who visited remember the long Lincoln dog walks with Ron because he so enjoyed talking to all those he met along the way.
Education and community were important to him. This was shown when he served on the board of directors at the American Red Cross of Northern Vermont and Somerset Hills, N.J., also the Weathervane Senior Housing in Lincoln, Vt., and Elderly Services in Middlebury, Vt.
He is survived by his much-loved wife, Dell, of almost 75 years, and his five daughters and their husbands; Beth Ryer (Charles) from Eugene, Ore., Christie Jacks (Marshall) from Bolivia, N.C., Cindy Osbourne (Bud) from Hickory, Pa., Judy Robbins (David) from Rochester, N.H., Joanne Tong (David) from Keene N.H., as well as 10 grandchildren and 18 great-grandchildren. He was predeceased by his brother Dr. Keith Hadley from Tiburon, Calif.
Memorial Services will be held on Wednesday, Oct. 16, 2019, at 1 p.m., at the United Church of Lincoln at 23 Quaker St., Lincoln, VT 05443. A graveside ceremony will be held at on Thursday, Oct. 17, at 11 a.m., at Vermont Veteran’s Cemetery in Randolph, Vt.
In lieu of flowers, Ron’s wishes were that donations be sent to Rotary International Foundation, Elderly Services Inc. of Middlebury or Addison County Home Health and Hospice.◊