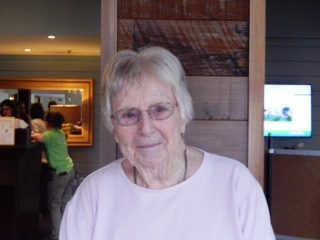 MIDDLEBURY — Margaret Mary (Peg) Condon, daughter of Charlie and Mary Hall, was born on Aug. 15, 1929, in Hartford, Conn., and died on Sept. 8, 2019, while residing at the Residence at Otter Creek in Middlebury. She was the oldest of three girls, Patricia Damiata (deceased) and Joyce Hinsley of Lyme, N.H.
Peg received her B.S. from The University of St. Joseph in West Hartford, Conn., and her M.S. in Nursing from Boston University. She worked a variety of nursing positions throughout her career, retiring from Castleton State College where she taught in the RN Nursing program. Nothing thrilled her more than running into her past students from time to time, including in the final stage of her life, and encouraging current students in the field of nursing.
Peg met her husband Robert (Bob), at Boston University in 1960 and they were married in 1962. They had two daughters, Ellen and Anne Condon. They lived in Bedford Mass., Rutland and Shrewsbury Vt., and Denmark, Maine, before landing in Middlebury in 2008.
Peg was known for her quirky sense of humor, wearing tee shirts from places she or her granddaughter Zelie traveled to, outspokenness, and commitment to water quality of Moose pond where she and Bob had owned property for over 50 years. She was also a staunch advocate for people she felt needed a voice. She enjoyed travelling to Montana to visit new breweries with Ellen and loved spending time at Anne’s with her and the grandchildren and great-grandchildren.
She was preceded in death by her husband Bob and many pets, including dogs, cats, turtles and fish.
She is survived by her daughters Ellen Condon, and husband Cary Griffin of Florence, Mont.; Anne Condon of South Burlington, Vt.; grandchildren Ryan Layman, Kelsey Carruth and husband Jevin Carruth,; Zelie Condon-Layman; and two great granddaughters, Isla and Fiona Carruth.
A Mass of Christian burial will be celebrated on Friday, Sept. 13, at noon at St. Mary’s Catholic Church, 326 College Street in Middlebury, with the Rev. Luke Austin as the celebrant.
In lieu of flowers, donations can be sent to the Alzheimer’s Association, University of St. Joseph in West Hartford, Conn., or Homeward Bound, Addison County’s Humane Society in Middlebury, Vt.
Arrangements are under the direction of the Sanderson-Ducharme Funeral Home of Middlebury, VT. Online condolences at sandersonfuneralservice.com.◊