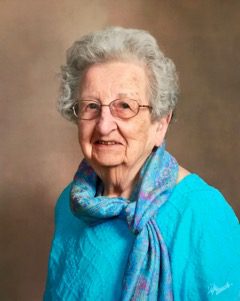 NEW HAVEN — Elizabeth (Betty) Agnes Bibik Eaton, born on May 27, 1924, died in the early morning of July 24, 2019, with family by her side at the Helen Porter Nursing home in Middlebury, Vt.
Betty was the daughter of two immigrants. Her father, William Bibik of what is now Belarus, was involuntarily conscripted into the Tzarist Russian Army when he was 12 years old. He escaped around the beginning of the 20th Century and landed in the U.S. via a peripatetic route through Europe and Canada, crossing many borders illegally. Betty’s mother Rose Janiec Bibik immigrated from the Austro-Hungarian Empire (now Poland) at the age of 16 with one 12-year-old brother. Their ship entered the U.S. at Ellis Island.
William and Rose met and married in 1909 and Betty was the ninth of their 11 children, all raised on a succession of farms in upstate New York.
During high school, Betty was a registered WW II enemy aircraft observer and she assembled survivor kits for the U.S. Navy. Betty was the valedictorian of her high school class and attended the New York State Agricultural and Technical Institute at Delhi (now State University of New York at Delhi) to study dietary science. While there, she met Walter G. Eaton, who was attending the same school for agricultural studies. While not near as diligent a student as Betty, she liked him for his handsomeness and fun.
While they dated, Betty did his homework for him. Walter had come home from the war having served in Europe and North Africa as a tank driver, twice wounded and decorated, and rebelliously determined to be a farmer despite the contrary wishes of his father, a Manhattan-based surgeon. Betty and Walter married on July 20, 1946, and together raised eight children on their dairy farms, the first in North Hero, Vt., and the second in Schoharie, N.Y.
Betty and Walter worked hard together under sometimes very difficult conditions. When they started out in 1947, Betty’s records show that milk was selling to the local creamery for 3.5-4 cents a pound (14 cents a quart). As now, there came a time when dairy farmers had to “go big or go out” and Walter decided to “go out” when the local co-op refused to pick up milk below a certain amount. The cows and horse were sold, the land rented to neighbor farmers, and the chickens, orchard, and gardens remained when Walter, ever the big equipment man, became a tractor trailer driver.
As the first kids grew old enough to take care of the little ones and go to school, Betty started working off the farm, eventually becoming a celebrated baker at a local kitchen café on a large carrot farm. Betty turned her home recipes into commercial batches for pastries such as bread, cakes, cookies, and muffins, all made with carrots. Betty had a home business making wedding cakes, delivered by recruiting her kids to carry one carefully decorated cake layer each to the wedding sites where she assembled the whole beautiful tower.
She served in children’s clubs including Little League, 4-H, Cub Scouts and Girl Scouts. She was also a long-time member of the Cobleskill Hospital Auxiliary. Betty was a devout Catholic and served tirelessly at the local church by doing linens and flowers and baked goods for the church sales. She became the chaplain and a Level 1 Emergency Medical Technician for the local ambulance service and, when the calls came, she would pop on her jump suit and tackle whatever was needed.
She also served for years on Schoharie’s Cushing Memorial Library board of trustees (some as president). In that position, she helped the library recover from a destructive flood and she convinced then Senator Hilary Clinton to visit the library to open the new children’s wing built after the flood. The community room of that library is named for Betty.
In her 60’s and 70’s, Betty organized and guided bus excursions for “old people.” She had a wide circle of friends with whom she played cards and socialized. In 1992, Betty was named Schoharie County Senior Citizen of the Year. Walter died in1996 and Betty eventually moved to Vermont in 2013 to live with her daughter Patty and her husband Dave Lewis in New Haven.
It was difficult to sever the bonds she had forged over the decades in Schoharie, but ever the plucky person, she became just as embedded in the local communities here, volunteering at Bristol’s St. Ambrose Church suppers, baking for the Mt. Abe after school programs, volunteering at Project Independence in Middlebury teaching pinochle twice a week, and (one of her favorite things) having coffee every Wednesday with her “Coffee Mates” at Almost Home in Bristol. Her “job” with the group was to be the teller of jokes so they would all have a laugh together.
Up until the end, Betty was a mom and a good friend. She was a fiercely independent and strong woman, a baker, a bird lover, a donor to charities, a diligent keeper of family facts and of her own finances. And she kept up her determination and sense of humor to the last.
Betty is predeceased by her husband Walter and her daughter Kathryn Eaton. Betty is survived by her 98-year-old sister Mary (Jim) Andrecheck of Richfield Springs, N.Y., and her children Walter (Lorraine) Eaton of Schoharie N.Y., Margaret Eaton (Ron Yara) and Patricia (David) Lewis of New Haven Vt., Frances (Ray) Gilday of Ashburnham, Mass., Marianne Eaton of Bristol, Vt., Virginia (Doug) Paton of Charlotte, Vt., and Richard (Mary) Eaton of Warrensburg, N.Y. She was a grandmother to 13 and great-grandmother to 17 children whom she cherished.
Following her funeral, Betty will be buried next to Walter at the Old Stone Fort Cemetery in Schoharie, N.Y.
A memorial Mass will be held at St. Ambrose Roman Catholic Church in Bristol, Vt. at 11 a.m. on Aug. 13. In lieu of flowers, donations can be sent to Elderly Services, Inc., PO Box 581, Middlebury, VT 05753.◊