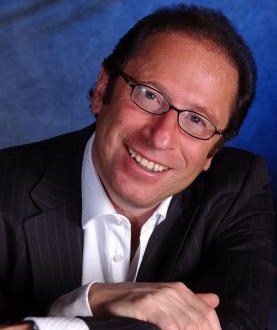 Mark Stevens, CEO of MSCO, a firm that specializes in strategies and integrated marketing solutions. Photo/Andrew Dapolite
By By Ira Ellenthal

Where to begin?
Perhaps with the fact that my interview the other day with entrepreneur Mark Stevens opened with him telling me that nothing’s off the record, that I can print anything he says, no matter how personal or controversial. No one has ever said that to me before.
Within minutes, I realized I was interacting with someone who just might be the most interesting man in the world. No, not the distinguished bearded guy in the Dos Equis beer commercials; the one who made a weeping willow laugh; the one who once ran a marathon because it was on his way; the one who has taught old dogs a variety of new tricks.
Unlike the fictional character in the celebrated commercials, this one is flesh-and-blood real. Stevens lives in Bedford and attracts prospective clients to his Rye Brook office so they can try to convince him to handle their marketing.
“I’ve never had to ask anyone for an order,” he says matter-of-factly and seems to mean it, no matter how unlikely it sounds.
Stevens is the wildly successful chief executive officer of MSCO, a firm specializing in strategy and integrated marketing solutions.
For the past 22 years, he and his team have been engaged in high-stakes business-building initiatives with both senior corporate executives and small-business owners, advising them how and why their marketing falls short, and how it can be vastly improved to grow their companies. He plays it in person; he plays it in his high-powered, drive-time radio commercials on which he spent $2.1 million last year; and he plays it in his runaway bestseller, “Your Marketing Sucks.”When he isn’t talking to the players in the business world about their marketing, he’s either solving their problems or writing books. He’s written 20 so far, including the only biography ever written about financier and self-described shareholder activist Carl Icahn, a multibillionaire.
“Carl’s the smartest businessman I’ve ever met,” Stevens says, “but he threatened to sue me for everything I had if I went forward with his biography. I held fast and eventually he dropped his threat and agreed to cooperate with me on the bio, which is available on Amazon and just contracted to be published in China.”Stevens has been close friends with Icahn for more than 50 years, going back to our days in Far Rockaway, and I can count on one hand the number of times he has lost such a stare down.B
ut back to Stevens and corporate marketing. His passion for it is palpable. “The problem with their marketing,” he says, “is that it’s often poorly designed and terribly executed—to the point that it just plain sucks. It fails to achieve the only legitimate goal… to drive a company’s growth.”Clearly, Stevens is a pleasure to interview, answering all of my questions; many before I even asked them.
During the 10th anniversary sequel to “Your Marketing Sucks,” Stevens underscores that most marketing programs are the equivalent of throwing $1,000 bills out the window. “I call it spending camouflaged as marketing,” he says. “You’ve got to demand that money spent on marketing brings in more money than you’ve spent on it.”Stevens calls this branding concept “extreme marketing,” a term he coined and—you guessed it—marketed successfully.
“In essence, extreme marketing means that you have to do everything possible to guarantee that every marketing dollar you spend is set in a strategic context and is based on a plan constructed to make certain that every tactic and tool reinforces every other you are using,” Stevens says. “And, of course, it means that you must bring back a return that’s more than the dollars you invested.”
When he first sat down to write “Your Marketing Sucks,” he says he did so “with a strategic and philosophical goal in mind: to posit that marketing was increasingly a show of aesthetic grandstanding to win awards for creativity. Its real aim should be to deliver marketing’s only legitimate prize, the sale of more products and services.”
While that perspective, and roadmap for accomplishing it, remains the bedrock of the Stevens’ recent book, he notes that much has changed in the world since it was first published and immediately became a bestseller.
“There was no social media to speak of,” he said. “E-commerce was alive but in its infancy. Mark Zuckerberg was an obscure Harvard student. Steve Jobs was diagnosed with a pancreatic tumor. And Instagram was seven years away from launch.”
When I asked him to give me an example of great marketing, he smiled, opened the 10th anniversary edition to its dedication and politely asked me to read it:“To the creators of all the cheesy commercials I watched as a kid, which made me bug my mother to buy cereals I detested so that I could win a horse (which would have had to be housed in a one-bedroom apartment in Queens). That’s great marketing.”
Happily married and the father of two fully grown, financially successful sons, Stevens says that he considers himself blessed. He also says that he loves his life and loves being interested in so many passions.
And all of it shows in every possible way.

RIPTON — The memorial service in celebration of the life of Rev. Wayne Alfred Holsman, 87, … (read more)

See when your favorite high school team is competing in the fall sports playoffs.